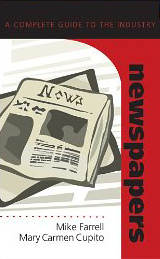 This is a compact review of the legacy of newspapers in the United States culminating in an attempt to bridge the fading presence of print with the explosive nature of the Internet. The book is intended as a textbook for an introductory news or journalism course. The book achieves this goal admirably.  Another goal is to argue for the enduring presence of newspapers but to point to a news environment that is increasingly mediated electronically.  In this regard, the authors are less successful. First, the broad contours of the book. There are 11 chapters. The first nine concentrate on newspapers with occasional references to the Internet. The tenth chapter (The Newspaper Meets the Internet) unveils the power and impact of the new technology and, as noted in the text, is written by a colleague of the authors, Deborah S. Chung. She does a good job. Mainly she focuses on the three facets of media convergence — technology, economics and regulation. Chung notes how the new technology makes it easier for citizens to participate in civic discourse and points out challenges facing journalism educators in devising a curriculum appropriate to the rapidly changing media environment.

But it is the first nine chapters that make up the bulk of the book. These are well written, extensively researched (837 total citations) and supported by the authors’ strong professional and academic credentials. After a 20-year career as a newspaper reporter and editor, Farrell teaches journalism at the University of Kentucky. Cupito teaches at Northern Kentucky University, having worked in public relations and as a freelance writer.

In their panoramic view of the world of newspapers, they present a succinct and reasonably complete overview of newspapers and, along the way, news in general. The work is highly readable, even absorbing (a compliment for any textbook!). They draw on many real-world examples to illustrate or reinforce important points. The authors begin their treatise at the beginning, that is, news – what is it? Lots of different things, it turns out. Take as an example the news of John F. Kennedy’s assassination in 1961. And the news of the moon landing a few years later. Then they tell of a news tip to a reporter that a so-called “century plant” that blooms as rarely as once every 100 years was — maybe — about to bloom. It’s all news, of one sort or another. The point is made: “Deciding what is news is the most important element of the journalistic process” (4). And that plant, after attracting wide local attention, sadly, did not even bloom.

From news, the authors, chapter by chapter, traverse a vast plain: newspaper history, press freedom, roles of a free press (including rural press), readership, ownership, ethics and law. It’s a fast-paced journey but well worth the effort of anyone trying to understand the part played by newspapers in establishing a foundation for a society carrying on a vigorous conversation with itself.

The book contains many keen insights. Two examples: comparing the shrill tone of early American journalism with the stridency of bloggers today and exploring the apparent contradiction that while journalists today seem to place more emphasis on ethics, public distrust of the news media seems to increase.

Other than the danger of such a book quickly becoming dated (even as I write this comes a report that Facebook could replace Twitter as a journalistic platform), there are few quibbles. But here’s one: Chapter five is titled The Role of the Rural Press. This seems entirely appropriate for an often neglected aspect of journalism. Prominently mentioned is the work of the Institute for Rural Journalism and Community Issues, established in 2004 and based at the University of Kentucky. Worthy of mention would have been the work of the International Society of Weekly Newspaper Editors, which has promoted and recognized community-oriented newspapering since 1955.

The eleventh and final chapter tries to identify possible emerging journalistic scenarios. Optimism for newspapers prevails, albeit parenthetically. The title of the last chapter: The Future (Because There Will Be One). Arguably, the most important observation in the book comes near the end. Eloquently and tersely, the authors state their main thesis for the endurance of journalism: “A free press cannot exist without a democracy, and a democracy cannot exist without a free press” (216).

As a former newspaper reporter and long-time journalism educator myself, I think Newspapers would be a useful text in an introductory journalism course. But today, when young people are  inclined to carry their media in pockets or purses, the classroom will require ever-current resources and methods to cope with a turbulent media environment.

Newspapers is the sixth volume in the publisher’s series on media industries. Previous volumes have dealt with broadcast, magazines and radio.